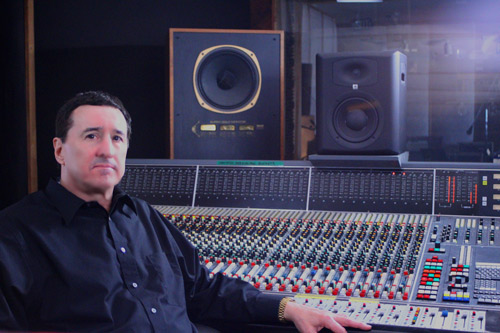 Perris Alexander, our award-winning chief mastering engineer has over 30 years experience mastering music. He has completed hundreds of projects for clients from unsigned independent artists to major labels.

A world-renown audio mastering engineer, Perris has mastered songs for a diverse selection of artists in all genres. He is  also  a musician, producer and music supervisor so he can hear your songs with a fresh new and expert perspective. Perris will meticulously master your songs. He will give special individual attention to each song mastered and will let you know if their are any problems in your recording or mix. Perris is available to review your songs and answer any of your questions.

Perris was born into a musical family and played piano since the age of five. At sixteen he started working in recording studios as a backup musician and vocalist for major acts. At seventeen he signed a record deal with Dennis Rose of the famed Golden Goose Productions under Dantz/Capital Records. Dennis mentored Perris and taught him how to produce, audio engineer and master great recordings. After Perris received  his B.A. Degree in music from Cal State University Long Beach, Dennis introduced Perris to Gwen Gordy of Motown records and Perris programmed and played synths on some great music. A friend who was a Disk Jockey at a radio station got Perris involved in learning voice-overs and playing the hits. Later this led to Perris becoming a highly sought after club Disk Jockey, remixer and audio mastering engineer.

Awards: Gold Awards with a variety of artists and Platinum Sales Award (soundtrack of the year) with The Centurions for the song Bullwinkle Part II in the award-winning movie Pulp Fiction.